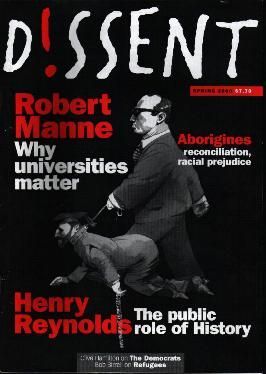 Henry Reynolds discusses the paradox of history's growing importance as politicians, judges, and community groups turn to it for justification and inspiration, while at the same time history struggles for survival in both schools and universities.

Jill Byrnes makes a comparison of aboriginal and non-aboriginal values based on her twenty years of working with aboriginal people, most recently in the Kimberly region.

Jamie Mackie reflects on the importance of the Walk for Reconciliation across the Sydney Harbour Bridge. He concludes that while racism is far less prevalent now than in the past, unless we keep striving to improve race relations, we may experience little more than a shift from hard to soft Hansonism in new and nasty guises.

Robert Manne bemoans the decline in collegiality and the rise of corporatisation in universities now led by Vice-Chancellors who have acquiesced totally to the dictates of government, and acclimatised so enthusiastically to the ethos of business that they have betrayed the institutions whose well-being they were entrusted to safeguard.

Dave Corlett discusses the personal plight of refugees coming to Australia from the Middle East.

Bob Birrell discusses the world-wide upsurge in asylum seekers, how this is leading to a hardening of public opinion against refugees in 'preferred destination' countries like Australia, and the various policies governments are adopting to balance these conflicting pressures.

Brian Ellis reviews two important books on New Left directions (Peter Singer, A Darwinian Left: Politics, Evolution and Cooperation and Anthony Giddens, The Third Way: The Renewal of Social Democracy). Ellis agrees with Singer that good policies have to be based on a realistic evaluation of human nature which, as most modern Darwinists would agree, provides scope for enterprise based on cooperation rather than competition. The Third Way accepts the socially destructive forces of the market. According to Ellis, Singer’s book explains why market forces should be curtailed when they threaten the sociality and cooperation which are essential to human nature.

Clive Hamilton - who advised the Democrats on the environmental implications of the Howard Government proposal to cut Diesel excise as part of the GST package - explains how the Democrat leadership was prepared to ‘trade-off’ their environmental principles in order to secure the government's agreement to remove the GST on fresh food.

John Legge reviews No Logo by Naomi Klein. She describes the growth in the virtual corporation in which brand image and marketing is everything and the work is put out to independent contractors in the third world where workers and the environment can be exploited with impunity. Legge discusses the riots at Seattle last November, which were a reaction against the WTO's 'free trade' agenda and the push for 'fair trade' which takes into account labour and environmental standards.

Race Mathews argues that the results of demutualisation are not conducive to the interests of members or the public.

Richard Broinowski looks at the history of Australia’s involvement with the United States in wars in Korea, Vietnam and Iraq. He concludes that our involvement in these wars was not in Australia’s interests. Broinowski asks if Australia has learnt from these events and whether, if it is once more asked to demonstrate its loyalty to the US - as may occur in respect of the Taiwan Straits or the Korean peninsula - Australia will act in accordance with its own long term interest.

Kep Enderby argues that the explosive growth in the prison population throughout Australia is caused by the response of political and judicial authorities to the community's false perceptions that crime rates are rising and the instinctive demand by public opinion for retribution - even though retribution is counterproductive and serves no useful purpose except to satisfy a primitive desire for revenge.

Tonya Stevens explains why we need a trial of injecting facilities, based on her experience as a youth worker and city Councillor in an area where drug-taking is rife.

Ian Hundley describes how professionalism in the Victorian public service was destroyed by the Kennett Government. The Bracks Government's record so far suggests that the new ministry is not interested in public service reform.